Michael McKerr
MORE BY THIS AUTHOR

Benefits of prospecting down market

7 ways to find fulfilment if you're feeling lost

Dramatic declines in U.S. Treasury yields have captivated investors and traders over the last month.

Ten year Treasury yields have fallen to 2.15%, the lowest level since September 2017. Investors' flight to quality has been driven by the breakdown in U.S./China trade talks, weakening energy prices, rising geopolitical risks, and most recently, an unexpected 5% Mexican import tariff announcement. Yields have fallen so low that the effective Fed Funds Rate is now above all bills and notes out to 10 years, resulting in a myriad of yield curve inversions.

While those negative inputs historically tend to pressure interest rate yields, the magnitude and velocity of the decline has been perplexing, in that the Fed's preferred inflation measures haven't proportionately followed suit. Has the move in yields gone too far, too fast? It seems plausible that this is the case, so let's take a deeper look at what has driven yields lower and what may lie ahead from a technical and fundamental perspective.

U.S./China trade talks unraveling at the finish line truly was the straw that broke the camel's back for yields. The implosion of their trade negotiation progress blindsided global markets, which had all but priced in an accord. A spike above 20 in the VIX, a sharp sell-off in global equities, and most notably, a swoon in yields followed suit. Recent hawkish rhetoric from both the U.S. and China has led the European Central Bank to cut its global growth forecasts and warn of high volatility ahead if a protracted trade dispute continues. A major disruption to global trade is quite possibly the biggest risk to global growth in the year(s) ahead, and the unexpected decision to apply a 5% tariff to ~ $350 billion on Mexican goods imported amplifies these concerns. As pressure builds on equities, a head & shoulders pattern, which technicians consider a potential trend reversal pattern, has formed in the S&P500 (see chart below). A break of the neckline could put additional pressure on yields. 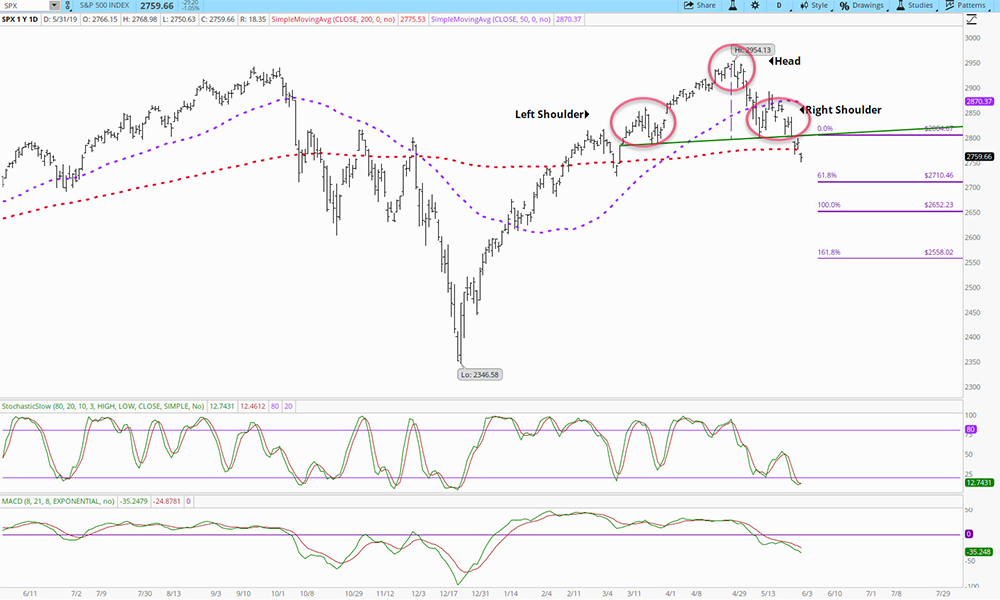 Source: thinkorswim. For illustrative purposes only

Commodities like oil, gasoline, and copper are considered barometers for global growth. In late January 2019, we highlighted an Inverse Head & Shoulders pattern in oil that helped propel it from $52 to nearly $67, achieving the 100% target of the pattern. However, its recent 12% drop alongside the slide in copper has weighed on U.S. yields and breakeven inflation rates (see FRED® graph below) as growth expectations are tamed.

Source: FRED®. For illustrative purposes only

Lastly, expectations of a Fed rate cut are depressing yields across the curve. Per the CFTC's Commitment of Trader's report, large speculators have amassed a large short position in 10-year Note futures of nearly half a million contracts, which some consider to be contrarian and supportive of lower yields. Additionally, the Fed Funds futures (FFR) are pricing in over 80% likelihood that the FFR will be lower in December than now (see graph below), and nearly three rate cuts by the end of 2020.

As previously mentioned, Treasury markets are pricing in more dovish Fed policy, and some believe the Fed may cut to spur inflation or get growth back on trajectory. If we look to the most recent speeches from Ester George and Vice Chairman Richard Clarida, they're singing a markedly different tune. Both echo that they do not see a good case for cutting nor raising rates. The tail-event that could derail global growth is a complete stand-still in trade, so this is something that we must consider. That said, if we learned anything from the Greenspan days, it's that when the Fed speaks, the market needs to listen.

Furthermore, the case for rate cuts based on sliding inflation seems misplaced. The Fed's preferred inflation metric, Core PCE (purple line in graph below), has been below their 2% target for all nine interest rate hikes since December 2015! Headline inflation (not stripped of food and energy costs) is on the upswing from troughs earlier this year. Considering the Fed has historically cut rates by 3-5% during recessions to spur growth, some analysts believe the Fed is not yet at a comfortable level in the FFR for that looming event.

Source: FRED®. For illustrative purposes only

From a technical perspective, U.S. 10-yr yields are sliding below their 200 week moving average, a level that has been a medium-term directional linchpin. Ten year yields are deeply oversold in terms of its Stochastic oscillator (see below), and looking at past instances of similar momentum levels, a retracement higher in yield may come in the month(s) ahead. Resistance is noted around the 2.65%-2.80% area, which coincides with the 50-week moving average. The 61.8% retracement of the 2016-2018 rally is near 2.0%.

Source: thinkorswim. For illustrative purposes only

Yields' recent depression has merit given the backdrop of economic and geopolitical uncertainties related to U.S./China trade, weakening energy prices, dwindling European growth, and Brexit. From a technical perspective, the market is more than extended and near long-term support, and past instances near these momentum levels has caused yields to move higher. Concerns over Fed policy seem misplaced, as the Fed has hiked nine times since December 2015, with its preferred inflation metric below target. Furthermore, Fed officials are publicly saying they do not agree with the market's belief about rate cuts. While there is room for this decline to continue if equities mirror Q4's turmoil, a reversion to the mean may lie in the offing for yields. Keep your seatbelts fastened, because this summer's market travels might be a little bumpy.

You cannot invest directly in an index.

Commentary provided for educational purposes only. Past performance of a security, strategy, or index is no guarantee of future results or investment success.

While these principals are the foundation of technical analysis, other approaches, including fundamental analysis, may assert very different views.

How have RIA firms pivoted their businesses during the pandemic, and what changes might be here to stay? Learn from these three advisors.

Is the best response to a market pullback always no response at all? Advisors weigh in.

A look at blockchain in investingand what it could mean for your clients.

The power of voice

Voice technology is here to stay—so how can your business make the most of it?

Welcome to the C-suite

6 steps to help you become an effective CEO

Please call our colleagues at Schwab Advisor Services at 877-687-4085 to continue the conversation about becoming an RIA or finding a new custodian.