Have no fear, market volatility is here

If an investment fund was advertising low double digit returns with little to no volatility, how many people would sign up? There’s a few reasons why that’s probably not a good idea, and why a moderate amount of volatility is actually a good thing.

Most people remember the fraud incidents that were exposed during the Great Financial Crisis of 2008-09; the biggest one linked to such claims of consistent returns with no volatility.

A 50% market drawdown tends to expose the bad actors. Declines of that nature are rare, but can seriously damage investors’ psyches for many years. As a result, whenever even a hint of volatility pops up again, people tend to make bad decisions with their money – mostly out of fear.

Increased volatility may produce opportunities for those willing to embrace the risks. Although a market that never goes down sounds like a great idea in theory, in reality it would be terrible because it removes the incentive to take risk, and the idea that every investor would behave the same way all the time is not practical.

Understanding the cause and effect of volatility is key to minimizing the harm it can do. In the chart below you can see the past few years of the S&P 500 Index (SPX) along with its implied volatility (IV), which measures future expectations of volatility.

IV is sometimes referred to as the fear indicator. When the market sells off, IV spikes, sometimes significantly above its average, tempting many investors to sell. But those spikes (indicated in the blue circles) happen to coincide with significant intermediate-term market lows (also in the blue circles), with the jury still out on the most recent spikes this year. 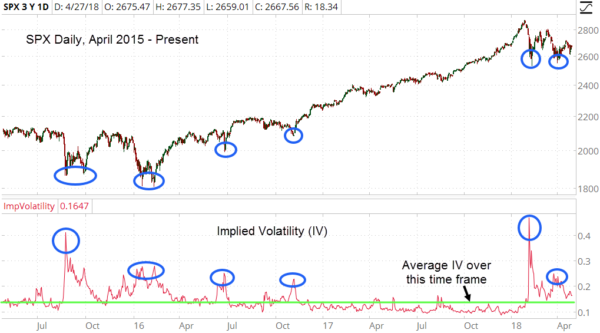 Images like this reinforce the idea that volatility, at least in moderate doses, may produce investment opportunities as long as the market’s primary trend is bullish.

At some point there will be another bear market like 2008-09, and volatility in a bear market can be very different from a bull market because fear tends to be more persistent during extended market downtrends.

But until that primary trend changes, a little understanding of volatility can go a long way in helping investors make smarter decisions.

Past performance of a security, strategy, or index is no guarantee of future results or investment success.

How to avoid making a bad hire

Your clients already have a client experience

Whether that experience is by design or default is up to you. And in an industry becoming increasingly more competitive on the CX, you need to fully considered the impression working with your firm has on your clients.

Nice to meet you, SEC

Registering with the U.S. Securities and Exchange Commission can be daunting for new advisors. The process is complicated, but these tips will help you get started.

Mergers and acquisitions on the horizon

We are in the midst of a merger and acquisition (M&A) boom.

What should you expect from a custodian?

A custodian can be so much more than a depository for your clients' assets. When selecting the right custodian for your advisory firm, consider these factors.